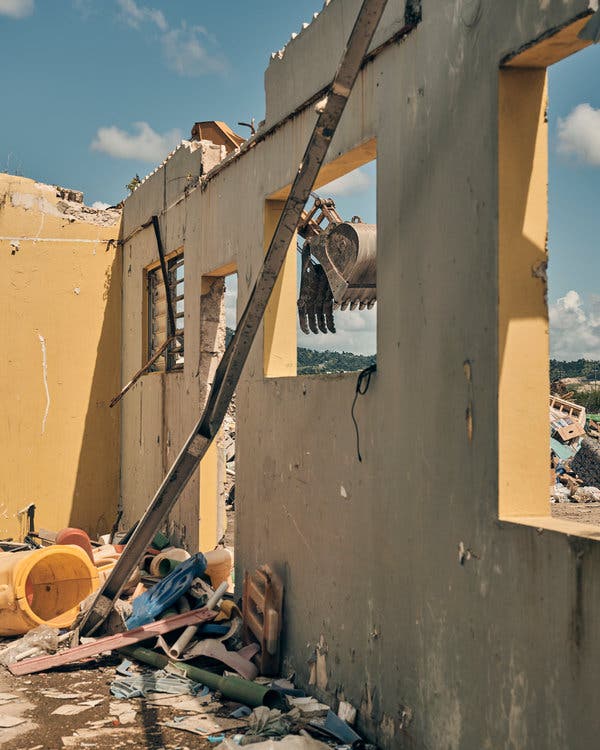 The Public Works Department’s workshop in Yabucoa, P.R., last month. Much of the town was destroyed by Hurricane Maria.

By Mark Walker and Zolan Kanno-Youngs

ST. CROIX, U.S. Virgin Islands — More than two years after back-to-back hurricanes ravaged this tropical island, medical workers are still treating gunshot wounds in hallways and kidney failure in a trailer. They ignore their own inflamed rashes that they say are caused by the mold that has shut down an entire hospital floor below a still-porous roof.

At least they have a hospital. The lone medical center on Vieques, an idyllic island that is part of Puerto Rico, was severely damaged by Hurricanes Maria and Irma, then abandoned to wandering roosters and grazing horses. Ailing people wait at the ferry dock to catch a boat to the mainland.

Two years on, “we are in the same situation as we were in the days after the hurricane,” said Rafael Surillo Ruiz, the mayor of Yabucoa, on Puerto Rico’s hard-hit eastern edge.

An examination of Federal Emergency Management Agency data and records demonstrates the degree to which the recovery from Hurricanes Maria and Irma on America’s Caribbean islands has been stalled compared with some of the most disaster-prone states on the mainland, leaving the islands’ critical infrastructure in squalor and limbo. FEMA officials say 190 long-term recovery projects have been funded in Puerto Rico — out of more than 9,000 requests. On the United States Virgin Islands, about 218 projects had funding — out of more than 1,500 requests and still counting.

A spotlight on the people reshaping our politics. A conversation with voters across the country. And a guiding hand through the endless news cycle, telling you what you really need to know.

In contrast, about 3,700 large and small permanent work projects had obligated funding in Texas, two years after Hurricane Harvey hit the Gulf Coast in August 2017. More than 3,700 such projects had been funded over that time in Florida.

That disparity underscored how a federal government in Washington has treated citizens on the mainland, with voting representatives in Congress and a say in presidential contests, compared with citizens on the islands. Further complicating the recovery are issues of corruption, often amplified by President Trump and, islanders say, questions of race.

“At the end of the day, we’re talking about the life and the well-being of human beings,” said Dyma Williams, the acting chief executive at the Gov. Juan F. Luis Hospital on St. Croix. “I hate to make the distinction about American versus not American, but at the end of the day, we’re not being treated the same way as other Americans are being treated.”

Jeffrey Byard, the associate administrator for the Office of Response and Recovery at FEMA, said the agency had never seen recovery efforts like those from the natural disasters of 2017, which included Hurricanes Harvey, Maria and Irma, as well as wildfires in California.

“Comparing disasters misleads the American people,” he said. “Each event has a unique set of circumstances, and numbers alone cannot and do not provide a complete picture of what is needed to help communities recover.”

And that permanent work is in little evidence on St. Croix and in Puerto Rico.

“When you’re living on an island and you don’t have a voice on decisions that are made, that tends to happen to you,” said Yves Abraham, the principal of St. Croix’s hard-hit Central High School. “Who do you gripe to? All we can do is sit and wait.”

FEMA officials say much of the problem lies with the system that Washington uses to pay for recovery assistance. Local governments or charities usually front the money to at least begin construction and then are reimbursed by FEMA. But the islands have seen a sluggish economic recovery after the hurricanes.

“Because of the fiscal challenges and their situation financially, they don’t have the funding or access to loans,” said Chris Currie, the director of the Government Accountability Office team that studies disaster relief. “So they are completely reliant on FEMA.”

Hopes were raised recently at the Juan F. Luis Hospital with the appearance of a row of trailers where the community could be treated until a replacement hospital is built. But Adrienne Williams-Octalien, the director of the local disaster recovery office on St. Croix, said the island did not have the upfront funds to start retrofitting the trailers, and help from FEMA had been delayed by a tussle over how much of the costs the federal agency would cover. That has pushed the completion date of even the temporary structure to the spring of 2020 — near the start of the next hurricane season.

“Most municipalities and agencies, which is what we are focusing on right now, don’t have the money to start the work,” said Ottmar J. Chavez, the executive director of Puerto Rico’s Central Office for Recovery, Reconstruction and Resiliency.

Almost from the beginning, relief funds have been caught in Trump-era politics, with freighted charges coming from Democrats and the White House.

“From Day 1, right after Maria hit Puerto Rico, there has been a different standard for how the administration responded to Harvey and Irma,” said Representative Nydia M. Velázquez, Democrat of New York and the first Puerto Rican woman elected to the House. She grew emotional as she described her trip to Vieques this month; her own sister had no power for 13 months.

The mayor of San Juan, Carmen Yulín Cruz, who personally clashed with the president, said she had searched for the answer for why the recovery effort in Puerto Rico and the Virgin Islands had been so slow and could come up with only one: Those places were treated with no sense of urgency because the victims were people of color.

“You can kill people with a gun or you can kill them with neglect,” Ms. Cruz said.

Some officials on the islands conceded that they bore some responsibility; they have struggled to retain local staff and have had difficulty with the paperwork needed to assess hurricane damage.

Mr. Trump has complained often about waste and fraud, especially in Puerto Rico, where the governor, Ricardo A. Rosselló, resigned in July amid a popular uprising driven by decades of mismanagement.

In truth, misuse of FEMA disaster relief is as old as the agency itself. After Hurricane Katrina, a Texas hotel owner was charged with submitting $232,000 in bills for phantom victims. Officials ordered mobile homes worth nearly half a billion dollars that were never used, and renovations for a shelter at a former Alabama Army base cost $416,000 per evacuee.

James Lee Witt, who led FEMA from 1993 through 2001, noted that in September 1995, Hurricane Marilyn struck St. Thomas in the Virgin Islands, damaged or destroyed most of the homes, closed the island’s hospital and cut off most communication. FEMA completed what he considered a smooth and fast recovery.

Now, he said, he knows of contractors in the Caribbean who are not being paid and have suspended operations until they are. Others have yet to start.

Congress recognized the slow pace of recovery in Puerto Rico and on the Virgin Islands when it allowed FEMA to waive certain requirements for reconstruction of infrastructure on the islands, including the rebuilding of hospitals and schools. The federal agency no longer needed to consider the condition of the facilities before the disasters in order to rebuild them.

FEMA made another significant concession for Puerto Rico. For some projects in the past, the agency has used “alternative procedures” that allowed a local government and FEMA to negotiate the overall cost of a rebuilding effort; FEMA would then front the money in a flat-fee contract rather than reimburse the local government later. As Puerto Rico’s recovery stalled, FEMA decided to use that method to finance virtually all of the infrastructure rebuilding projects.

But those concessions have not cut through the distrust. Puerto Rico says FEMA is lowballing its rebuilding estimates, while FEMA accuses Puerto Rico of exaggerating costs. Because they cannot agree on project-by-project recovery costs, work cannot begin.

So far, FEMA and other agencies have disbursed about $14 billion in aid to Puerto Rico, out of an estimated $91 billion that will be needed over the next two decades, Mr. Chavez said. Most of that money went toward debris removal, emergency home repairs and restoring power, which took almost a year.

Teachers at the Hope School, a special-needs public school in San Juan, were able to raise $60,000 for air-conditioners for the stricken building. They are still waiting for FEMA to reimburse them, the head of the school said. The Berwind Intermediate School in San Juan has been abandoned because of mold and water damage, its students shipped to an overcrowded school nearby.

“We have been able to deal with it, but it is uncomfortable,” said Manuel Echavarria, an English teacher who worked at Berwind for 13 years.

On Vieques, Ismael Guadalupe Ortiz, 75, has struggled to get treatment for his chronic kidney issues. The ferry to the main island is unreliable and overrun with tourists who get first dibs.

“Most of the people of Vieques don’t take care of their health because they have problems with the transportation,” Mr. Guadalupe Ortiz said.

Mr. Surillo, the Yabucoa mayor, estimated that residents in his city had abandoned 200 to 300 homes while waiting for help from FEMA. About 50 other houses are occupied, with blue tarps to keep out the rain. About 85 bridges need repairs.

“We received a little bit of money for single debris pickup, but when it comes to permanent work, not a penny,” he said.

The recovery efforts are more visible in the schools of the Virgin Islands, but they are far from where residents thought they would be two years ago. Children on St. Croix attend classes in trailers that from the inside are hard to differentiate from a typical classroom. But school gyms and music halls — some with collapsed roofs, others festering with mold — remain closed.

He doubted that they would still be forced to work in those conditions if they were on the mainland.